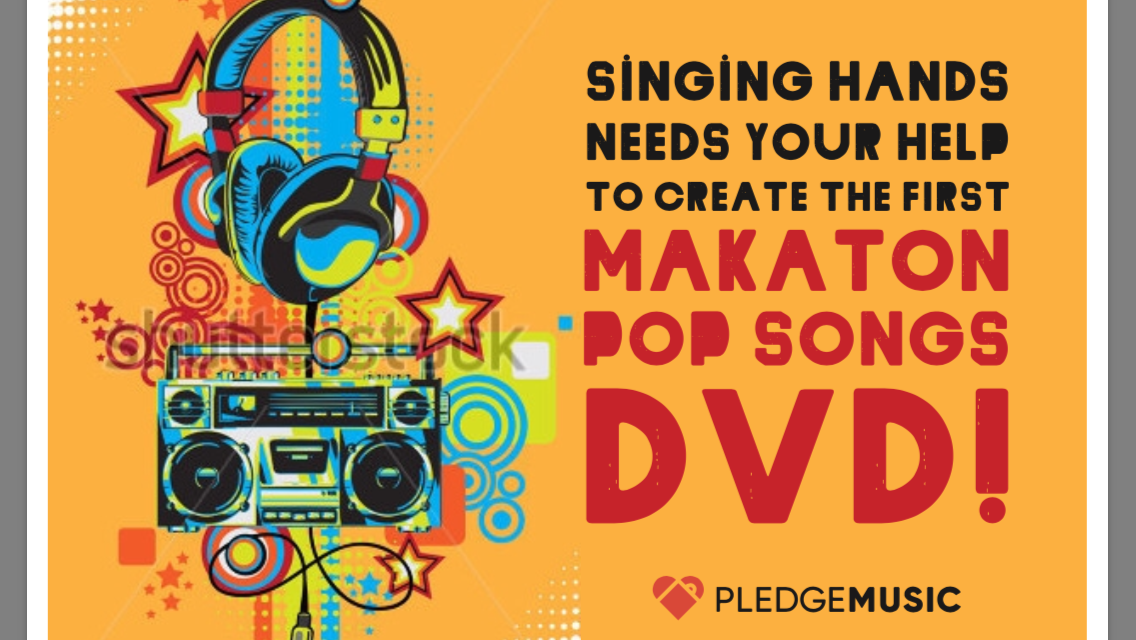 We are thrilled to announce that we have launched a Pledge Music Campaign to create a fresh and contemporary album and DVD of Makaton signed pop songs for older children / teenagers and adults who use Makaton.

As you know we are well-known for creating Early Years / Schools resources to help young children learn how to sign.  We were inspired following the birth of our eldest children (Ella and Miles) because they needed to learn Makaton in order to communicate. However, back then there was nothing out there to help us learn in a fun way apart from the one Makaton VHS Nursery Rhymes video – our children were born into a pre-Mr-Tumble world – so we just had to get on and make some resources for them!

Our gorgeous children are now 17 years’ old and remain our constant inspiration.  We want to create a DVD and CD album featuring Makaton-signed pop songs based on the themes of friendship and happiness.  Currently there is not a single age-appropriate musical resource available for older children/young adults who still need and enjoy using Makaton signing.

As you know, we use MAKATON sign language and symbols to translate the meaning of the lyrics of songs with the aim to teach, demonstrate and communicate this sign language in a fun, effective and creative way.  Our unique approach has enabled millions of people to use Makaton and help them engage with the world around them.

This new album will be produced in association with the Makaton Charity and is focused on reaching out to teenagers and young adults with iconic, timeless hit pop songs that everyone will know and will enjoy singing and signing along with us.  The songs are carefully-chosen featuring relevant concepts and great vocabulary and will also be enjoyed by younger ones who want a change from, or who are transitioning away from, nursery rhymes.  Through this album and our work with those with disabilities we aim to spread awareness of MAKATON in a fun, approachable and contemporary way.

The campaign was launched on the 21st March 2017 which was World Down Syndrome Day #WDSD17 and 5% of the proceeds of the Pledge will be donated to the Down’s Syndrome Association.

Please watch the Pledge video update – we explain that we are not asking you just to donate money (although there is the option to be an ‘Angel’ if you want!), we are simply asking you to pre-order the DVD/CD in advance or book one of the Pledge experiences (e.g join the Ukulele group to be part of a track on the album or book a bespoke Happy Birthday video message) – but we need you to do it as soon as possible!  Once we hit our target, we then spend the Summer recording and making it with the goal of having it available to Pledgers before Christmas.  So come on – get Pledging! You will love what we have in store for you!

We look forward to your support.

Many thanks S&T x